Haven't heard of beebread yet? In this article we will explain to you about the "superfood" of bees and why it is so valuable for humans.

First of all, the name "bread" is a bit confusing, because bee bread, also called perga, has nothing to do with bread or rolls. It is called bee bread because it is an important feed for the bees to feed their brood.

Ultimately, Perga is nothing more than the well-known bee pollen, which the bees do not immediately feed to the offspring after they have been collected, but instead keep it for the time being. To do this, however, fresh bee pollen has to be preserved, otherwise it only lasts for a few days. This is what the busy bees do with secretions and enzymes in their saliva. The pollen is then pressed into the honeycomb and stored there.

By mixing and storing it in the honeycomb, the pollen is fermented, dried, pressed into shape and made durable. In addition, the bee bread is coated with a layer of propolis to protect it from fungal and germ infestation, as well as from bacteria.

The process of fermentation by the bees' saliva has another positive effect: the valuable ingredients of the bee pollen, which are otherwise surrounded by a hard protective layer, are broken down and released. 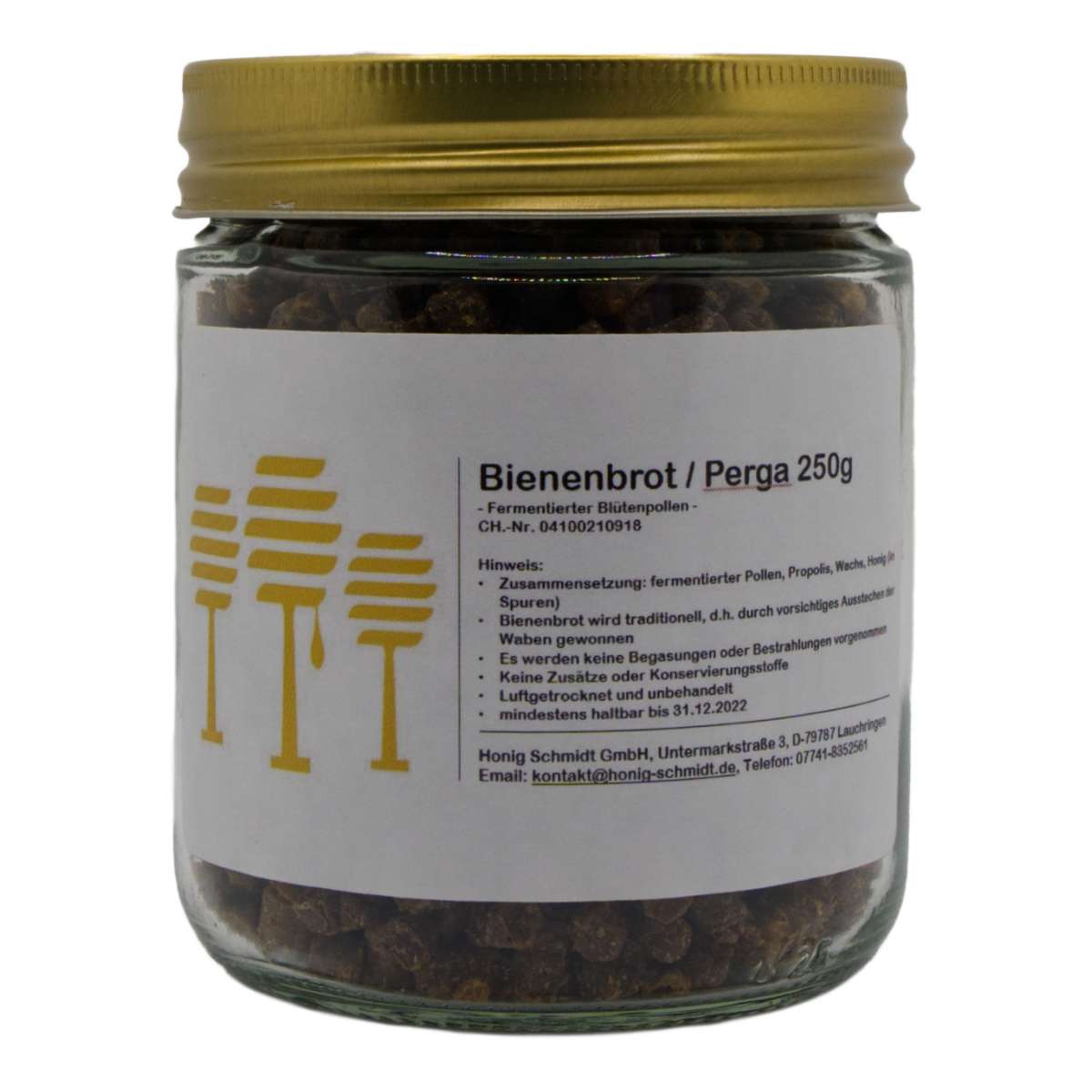 The harvest of bee bread

Bee bread is obtained by the beekeeper after the honey harvest is complete. For this purpose, the honeycombs are often frozen, because when it has hardened, the beehive can be removed more easily from the honeycombs. The best honeycomb-shaped beehive bread slabs can be cut out of the honeycombs with a punch. Alternatively, the honeycombs are mechanically crushed and sieved. The bees bread, which is heavier than beeswax, remains in the sieve and is then collected and dried.

The importance of the valuable ingredients are now also known to humans and bee bread is now used in herbal medicine as a dietary supplement. Bee bread has a mild, slightly sweet taste. You can chew it straight or use it in yogurt or muesli.

By the way, bee bread is not a new discovery. Already the Vikings are said to have used bees bread on their long sea voyages to strengthen themselves. Due to its valuable nutrient complex, bee bread is a welcome means of nutritional supplement and a good alternative to unhealthy snacks.

Beware of allergies to bee products

As with bee pollen, caution is advised when consuming bee bread, because bee pollen is one of the most common allergens as a natural product. So anyone suffering from a pollen allergy should be careful and slowly increase the consumption dose. Start with just a few granules and gradually increase the amount. If you observe an allergic reaction, you should refrain from consuming it.

In our Shop you can buy bee bread